Mr Carter has been working with church organs for over 40 years. He originally learnt his trade with J. W. Walker and Sons Ltd after leaving school at the age of 16. During these early days, he worked on many of the famous Walker jobs such as Brompton Oratory, Blackburn Cathedral, Paisley Abbey and Kendal Parish Church. By his early twenties, he was in charge of many instruments around London and the Home counties.

In 1973, he moved to Kettering to become the Midlands Tuner Representative. Four years later, in 1977, he moved to Yorkshire as Walkers were in need of a quality tuner and craftsman to replace the retiring Arthur Cooper. During this period, he was in charge of rebuilding such Instruments as Bradford Cathedral, Rochdale Town Hall and St. Olaves, York.

In 1984, after much deliberation, he decided to break away from Walkers and set up his own company. Since then, he has established a large Tuning connection of his own. In addition to tunings though, he has also undertaken some very fine rebuilds and restorations over the past ten or so years.

Mr Carter now looks after some of the most prestigious instruments in this area. These include Leeds Minster, Leeds Town Hall, Doncaster Minster, Rochdale Town Hall and Grimbsy Parish Church. Not only does Mr Carter look after many of the larger instruments in the area, he also looks after a substantial number of smaller organs which he considers to be just as important.

Mr Carter prides himself on the quality of the work offered to customers. Because of his attention to detail and his persuit for perfection with all instruments, he has been registered with the Guild of Master Craftsmen and was one of the first members of the new ruling body in Organ Building, the Institute of British Organ Building, (I.B.O.). The I.B.O. also recognises his quality as the handbook entry shows – ‘…Inspectors noted wide tuning experience, painstaking and practical approach to craftsmanship, and a workshop well-equipped for the range of work offered…’.

Mr Carter employes a number of staff and has access to a number of highly professional associates should the need arise. This gives the company the flexibility to handle both the smaller jobs and the larger jobs. 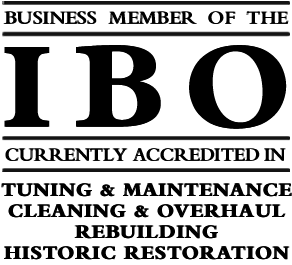